For the crust, blend the almonds with one Tbs of the flour in a food processor until finely ground and combine the ingredients into a crumbly dough. Spread it on the bottom of a 24cm-diameter ring and press lightly for an even surface. Bake in a preheated oven to 170oC for about 15min or until golden brown on top. Set aside to cool.
For the filling, blend with a spatula the cream cheese with lemon zest and juice, whip the heavy cream to soft peaks and then fold the two mixtures together and refrigerate until use. Soak the gelatin in cold water, roughly as much as needed to get all the sheets just covered, and let it sit while preparing the egg mixture. Bring the water with sugar to boil and combine the yolks, whole eggs and vanilla in a heat resistant bowl. When the syrup reaches 110oC start whisking the eggs at high speed and as soon as it reaches 125oC, pour it in stream in the egg mixture avoiding hitting the whisk as it keeps beating at high speed. As soon as you finish with the syrup, continue whisking, and in the same pot used for it, combine 1-2 Tbs water and the gelatin, drained, stirring until completely dissolved. You may return to low heat if needed but don't bring it to boiling point. In the same fashion with the syrup, pour the gelatin mixture in the eggs and keep whisking until lukewarm or slightly warm to touch. 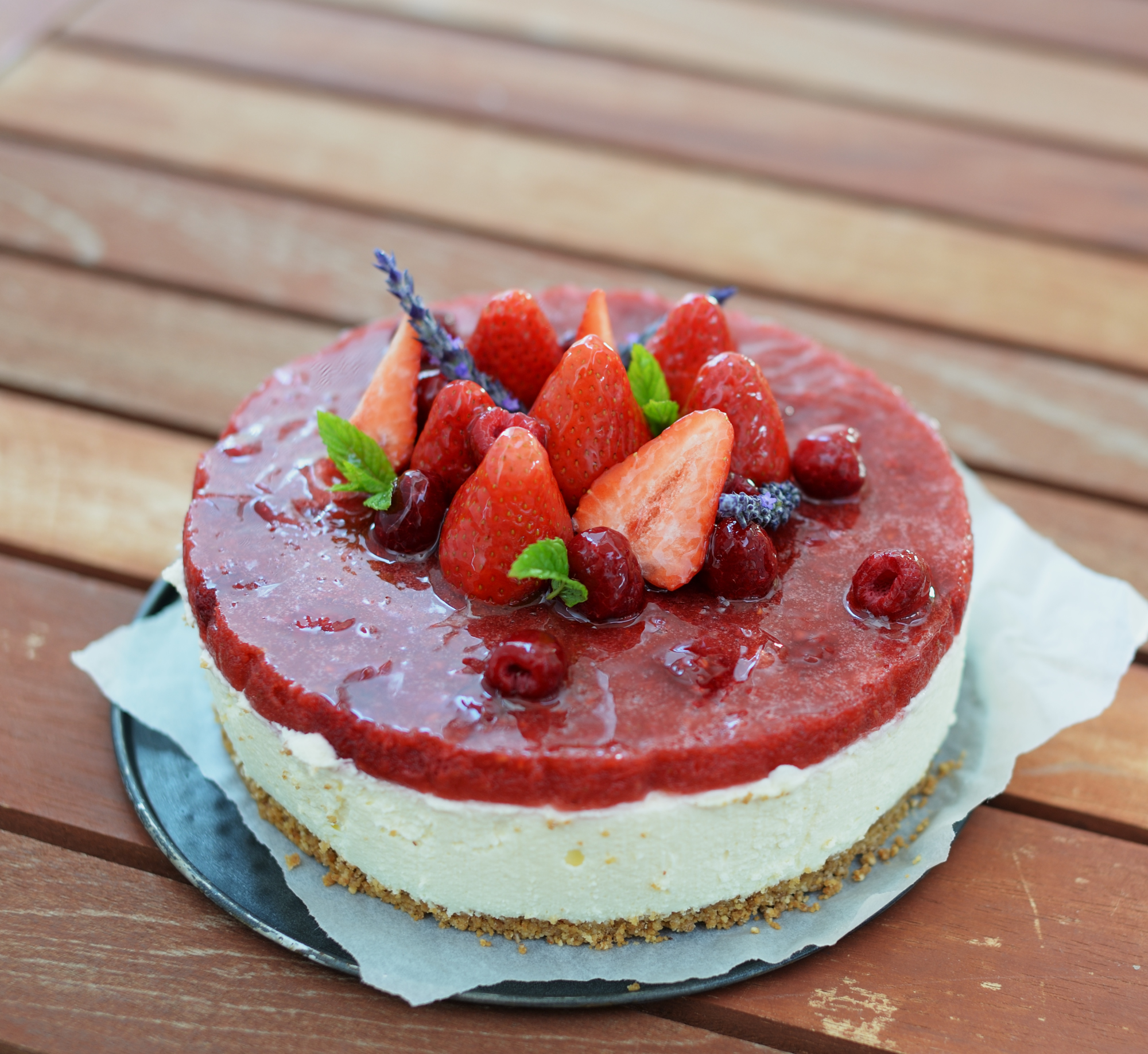 Remove the cream cheese mixture from the fridge and with the help of a spatula, or carefully with a mixer for persistent lumps , add the egg mixture in portions and fold until fully combined but not deflated. Pour the filling into a 24cm-diameter ring on top of the almond crust and refrigerate until set.
For the topping, bring the strawberries with half of the raspberries, sugar and water or juice to a saucepan and boil for 2-3min. Remove from heat and use a fork to roughly smash the fruit. Add the lemon juice and the gelatin, drained, and stir until fully dissolved. Finally add the rest of the raspberries and set aside to cool. Pour the mixture on top of the filling as soon as the surface is set and return to the fridge, preferably overnight.

''For the July Daring Baker’s Challenge, Ruth from The Crafts of Mommyhood challenged us to bake a cake. But not just any cake; she asked us to add in a special surprise for our eyes as well as our taste buds!''

For the chiffon sponges mix the ingredients for each flavor in separate bowls excluding the egg whites and 50gr of sugar from each recipe. Whisk the mixtures for about 3min and separately beat the egg whites and sugar to meringue. Then fold half of the meringue in each mixture and fill two 20cm-diameter rings sealed on the bottom with aluminum foil. Bake at 170C for about 45min, let cool and preferably refrigerate before cutting. Continue with the buttercream by thoroughly mixing the butter with shortening. Then combine the sugar with glucose and water in a small pot and keep watching the temperature with a candy thermometer until it reaches 100C. 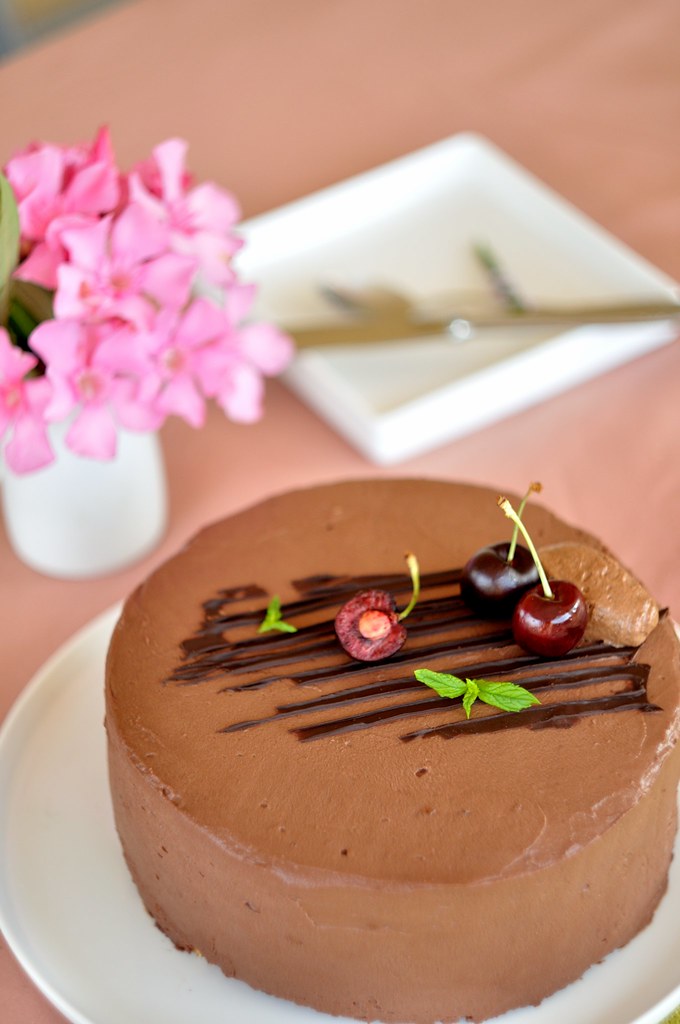 At this point start whisking the egg whites at high speed . When they become foamy and the syrup reaches soft ball stage at 120C, remove from heat and pour the syrup into the whites in the form of a string dripping between the bowl and the whisk, while whisking in medium speed. Continue beating at high speed until cool. Making sure that the meringue is not warm enough to melt the butter, gradually whisk it in also adding the vanilla. If necessary soften the hazelnut praline with some liqeuer to get a foldable consistency and combine it with 240gr of the buttercream. In the rest of the buttercream fold the melted chocolate with the last quite cooled down. 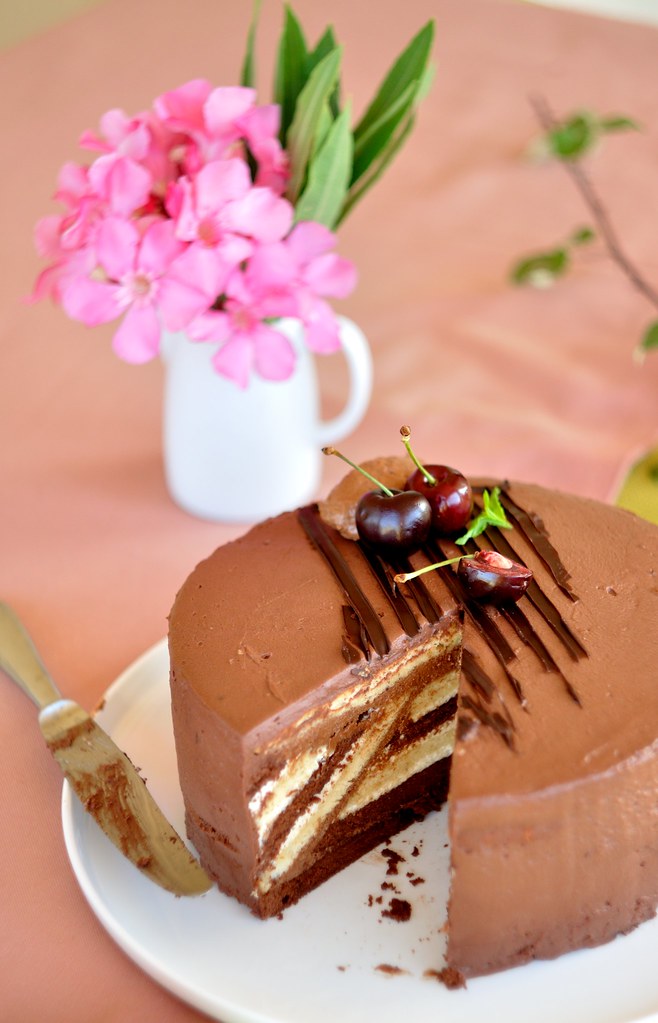 Cut each sponge cake in four layers keeping three from the one and 2-3 from the other. If you choose the chocolate one as the first, place one layer on the bottom and brush with the mixture of liqeuer and simple syrup. Then spread a layer of hazelnut buttercream 3mm thick and cover with a plain sponge layer also moistened with syrup. Spread hazelnut buttercream and repeat the same process ending up with a plain chiffon on top. After refrigerating for a couple of hours, take a sharp pointy knife and insert it diagonally 2cm from the sides of the top and towards the bottom at a distance of 8cm from the periphery. 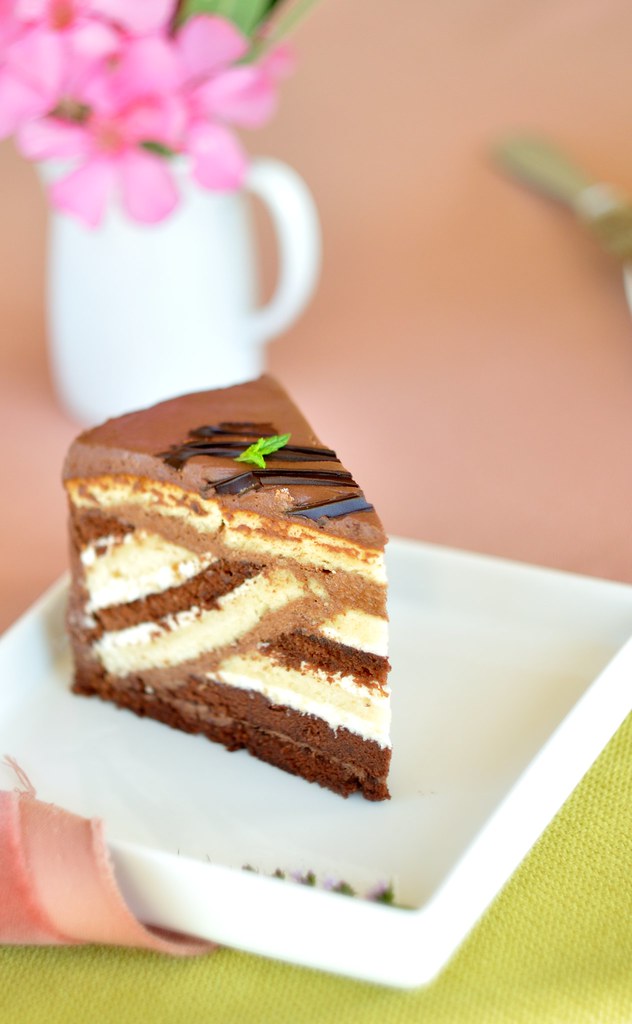 Cut all way parallel to the perimeter and remove a cone shaped piece with two bases measuring 16 and 4cm. Set aside and spread a layer of chocolate buttercream on the remaining cake, placing a chocolate sponge on top. Moisten with syrup and push the layer down to make sure it touches the sides of the hole beneath. Then turn the cake upside down and push down the sides to invert the shape of the hole. Spread another layer of chocolate buttercream and replace the cone in the hole. Optionally cover with chocolate buttercream and another sponge on top or just finish by frosting the cake with leftovers of the filling.
Posted by l at 10:54 PM 7 comments:
Labels: chocolate, hazelnuts 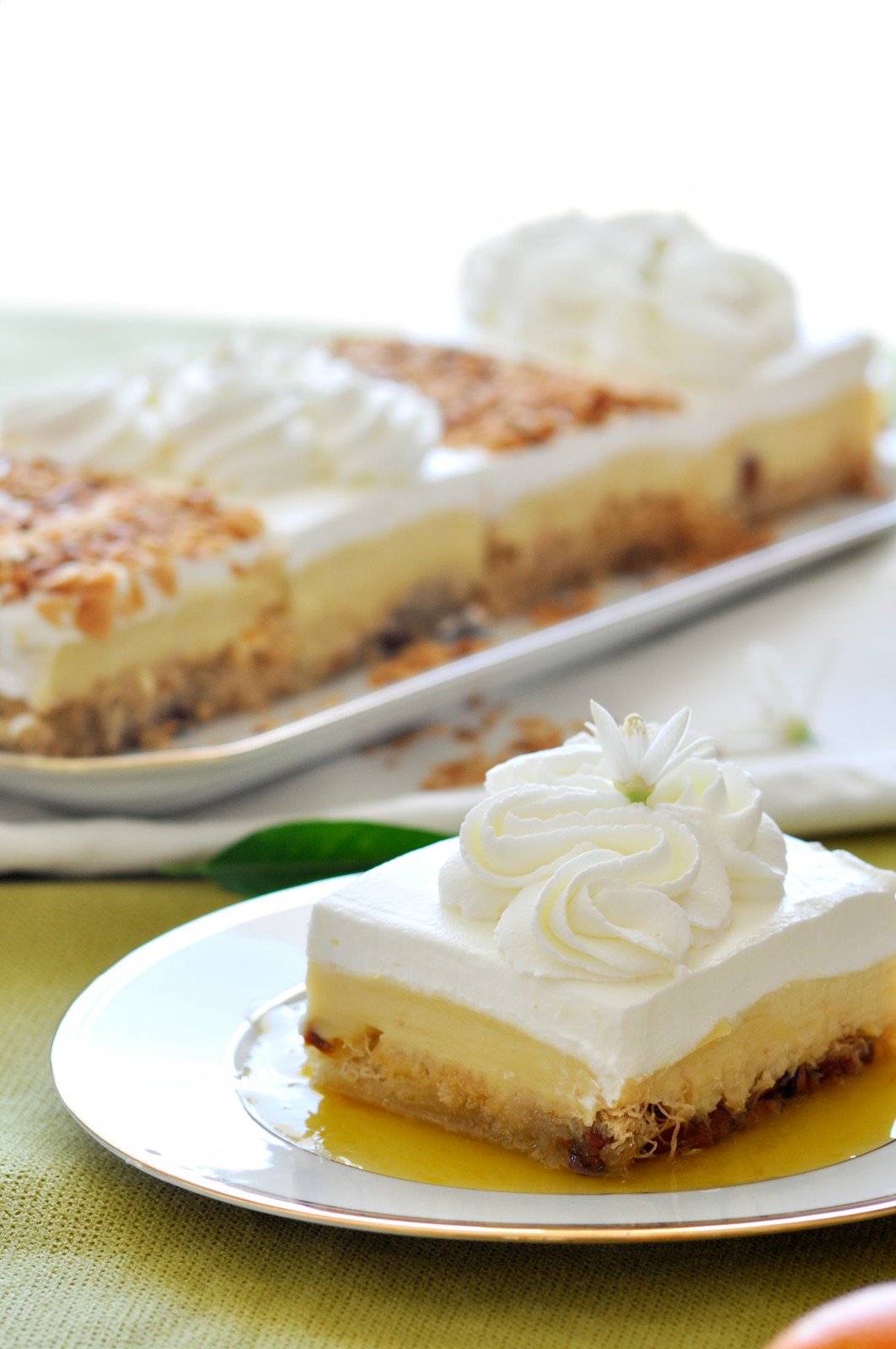 Temper the egg mixture with 1/3 of the hot milk whisking continuously and combine it with the rest of the milk over heat. Keep stirring until the cream boils and remove from heat. Stir in the butter until completely dissolved and pour the cream over the kataifi covering the top with plastic wrap. Let cool and refrigerate preferably overnight. Whisk the heavy cream to chantilly and evenly spread the 500gr over the cream keeping the rest for piping half of the 16 pieces. As a variation decorate the rest with sliced almonds and serve with the orange sauce made by boiling the juice with sugar.
Posted by l at 4:42 PM 1 comment:
Labels: kataifi
Older Posts Home
Subscribe to: Posts (Atom)